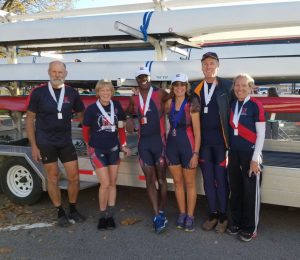 GDRA also rowed a Men’s Masters quad at the Speakmon, with William Turner, Todd Sobol, Brian White, and Chad Hagedorn. This was Chad’s first head race — he had a great time and is looking forward to more regattas next season! Richard Pierce competed in the Men’s Masters single race, and we also had two Mixed Open doubles — one with Ed Walz and Denise Heuser, and another with Meg Evans and Brian White.