Three members of our team won medals rowing at the Frogtown regatta in Toledo, Ohio, which was held on Saturday, September 28. Mike McCarty and Ed Walz took first place in the Men’s Masters double. Ed also won a third-place medal with Denise Heuser in the mixed double race. 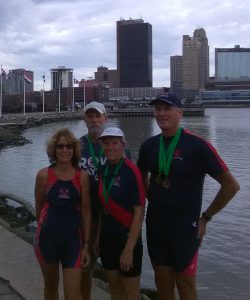 Meg Evans is also shown in the photo, although without a medal, having finished fourth in the mixed double with Brian White. Rounding out our team was Richard Pierce, who rowed a single. Conditions were good; the Maumee River was mostly flat and calm during the regatta.