GDRA rowers had a great sprint season this year, winning medals in every regatta we attended! We began by traveling to the Nathan Benderson Park Masters Classic regatta in Sarasota, Florida, at the end of February. Next up was the Clemson Sprints in South Carolina, in early April. After that, we were off to the Dogwood Masters Classic in Oak Ridge, Tennessee, in May, which is always one of our favorite regattas. The Indy Summer Sprints came next in June, followed by two regattas in July — the Independence Day Regatta (IDR) in Philadelphia and the Midwest Summer Sprints Championships at Dillon Lake, Ohio.

IDR was particularly notable because Ben Boehm and his daughter Sage finished in 2nd place in the father-daughter 2x, out of 10 entries, and Ben also won first place (for which the prize is a commemorative watch) in a composite men’s 2x.

Seven GDRA members will finish the season by traveling to Sarasota again for the USRowing Masters National Championships, to be held August 11-14. The trailer is loaded and ready for departure this morning. We hope to win medals and, also important, to have a good time and represent our club well. 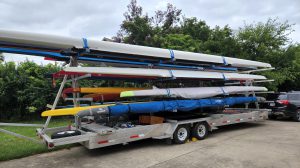